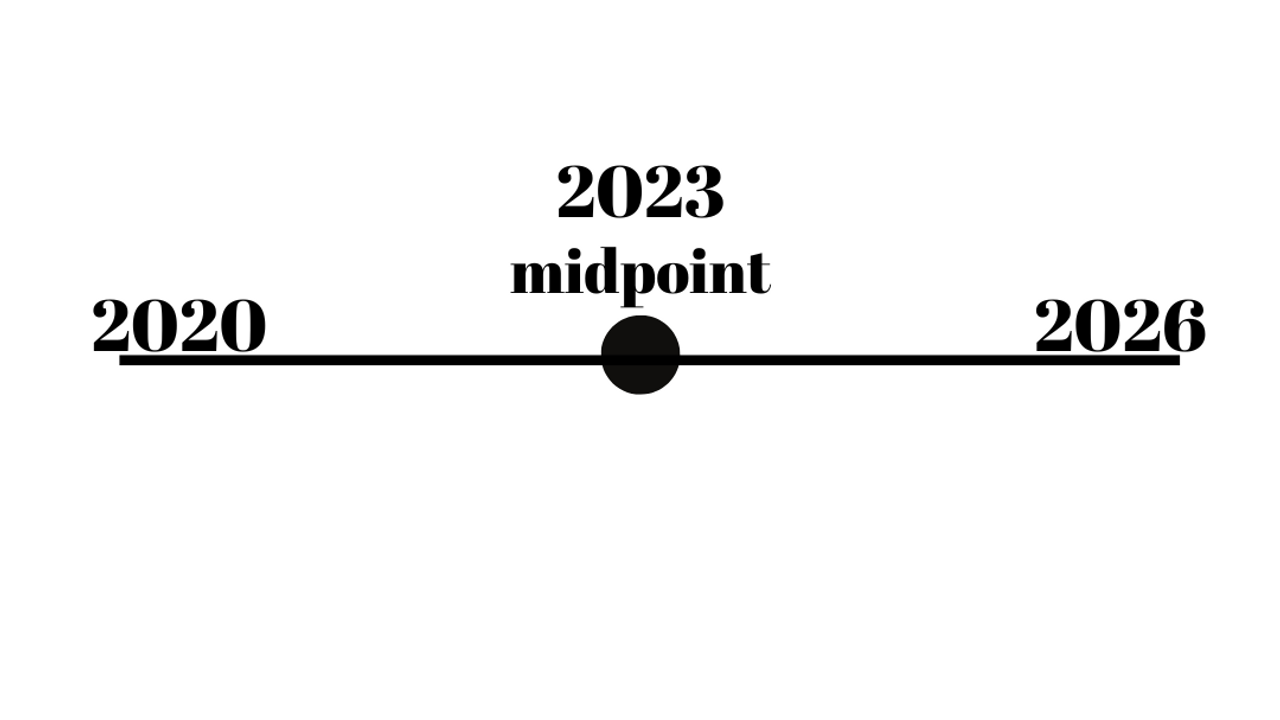 The letter “M” has been appearing recently. As I waited in the tent, renewed and recharged, for what is in store for the next year, V reminded me of the letter “M” again.

I pulled out a list of the words for the years from 2015 to 2022 which I was led to look up and list for the retreat. 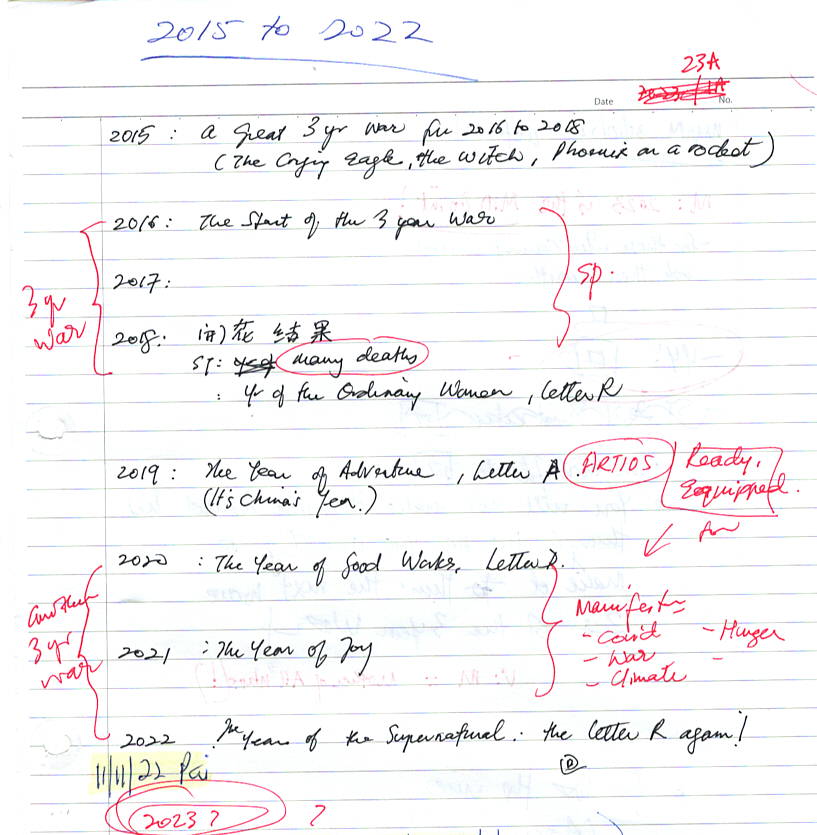 So, with my red pen, I start to group them, as V directs my hand.

Those were the Year of Blooming and Fruiting (where V says that many great Christians in the past generation will pass on), the Year of the Women and so on.

“Ahhh, so this is a spiritual war” I thought, remembering the verse V had said then, “Unless a seed falls to the ground and die….”, which will culminate in the passing of the spiritual mantle of great men and women of God of the last generation to the next.

I felt I had to skip 2019, where V had said that we are “Artios”, the year we were perfectly equipped and ready. For what, I was not sure then but it became obvious when 2019 ended with the Wuhan virus and we had to wage war for China and then our country.

Then the next group of another 3 years, which V says was the second 3-Year War.

I recall that this was the period when God warned of a currency war; a war involving trade that led to the previous two world wars. These were perilous times, He had said, the “D” letter was full of deaths and double deaths, darkness and so on. The world has seen untold suffering and death at the height of the Covid19 pandemic.

The Mother of All Wars

V: It is the culmination of the previous two 3-Year Wars between the people of God and Mammon (another M!), the love of money. It will be the “Mother of All Wars” (the Big M!).

Oh my! What should we do?

“No fear”, V assured me, as I shudder to imagine the extent of this war – the spiritual and the physical realms put together in one huge battle.

We have caught a glimpse of the advanced and devastating military weapons used in the Ukraine war and the painful repercussions of the pandemic. It has also exposed how Mammon has got the whole world interconnected and interdependent commercially, causing a massive disruption to the whole supply chain for parts, goods and services. This resulted in rampant inflation worldwide, from a single digit to double, hundreds and even thousands in percentage!

All over the world, people, especially the young people, are desperate for quick money, driven by FOMO and the rising cost of living and debt. Godliness and morality are no longer desirable or acceptable, as Babylon extends her web of seduction from the affluent West, backed by Mammon, to the rest of the world. Mental illness, yes, the “M” letter again, is rising fast everywhere.

V: Those who have survived the last two great wars well - who have not succumbed to the seduction of Babylonic wine, women and song [representing sexual immorality and depravity] and have not forsaken God to chase after what Mammon offers – easy money, woke ideology and values, will be secure. Remember the verse for 2022?

Yes, it is pasted on the inside cover of my journal. 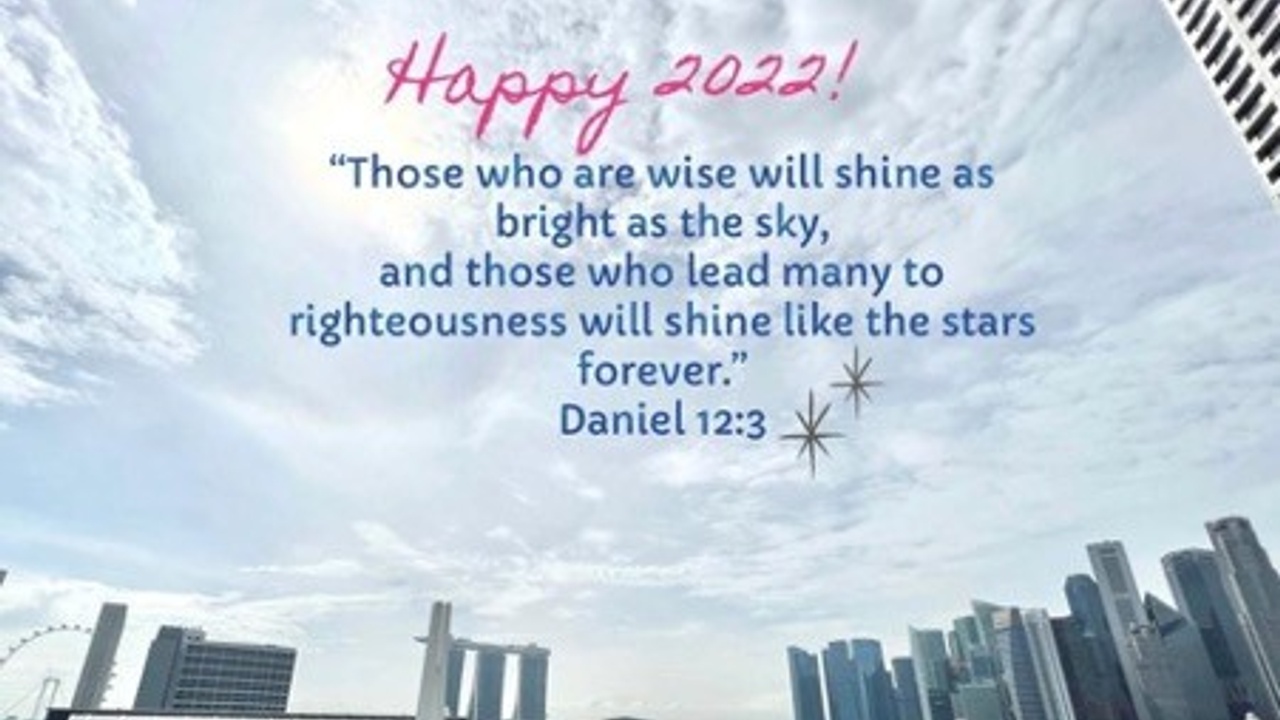 V: remember the choice I told the people to make on the Watchnight of 2019?

Ah yes, I remember. The Upright and the Wicked are segregated by our mouths, our words. And the 3 walks – to walk wisely and introspectively.

I pulled those old notes out (glad that I have asked V what to bring on this retreat, heavy as they are). 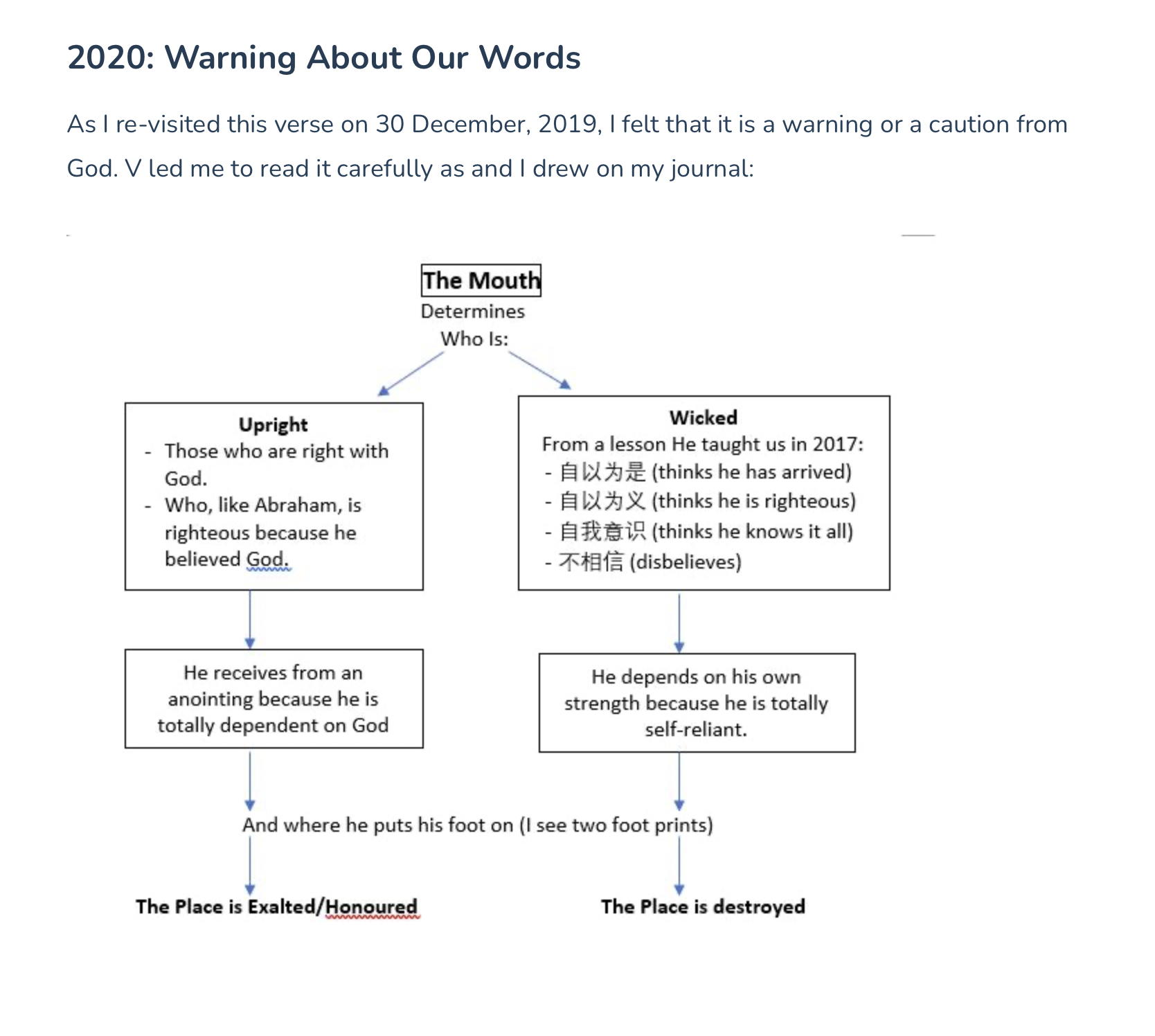 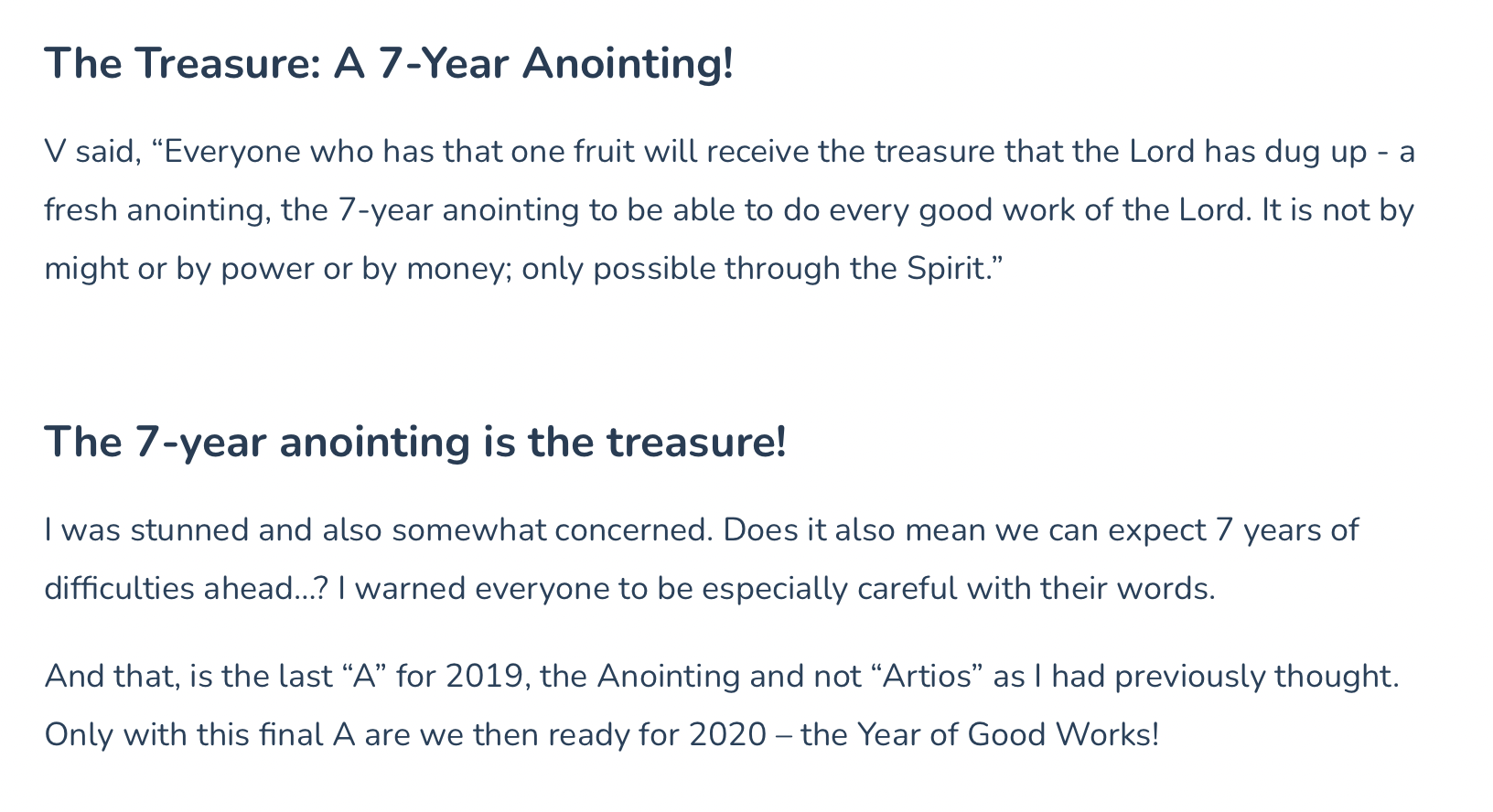 I thought to myself:

Of the 7-year anointing.

It is the pause, before the Mother of All Wars…

Perhaps, perhaps, I am grasping for hope now… by God’s grace, 2023 is the last chance, for some, to receive what remains of the 7-year anointing before that dreadful war starts? Or maybe even, that would be most ideal, to avert it…?

Mercy Lord, mercy. My soul cried out to God.

V: “The second 3-Year war of 2020 to 2022 has separated the Upright from the Wicked. Those who have heeded wisely are those who have survived well in this war, unscathed and secure, shining like stars in the sky.”

I rummaged through all the notes V had prompted me to bring – it all links with the Chinese character for “mouth“： “口” (pronounced as “ko”. Starting with what some of our team members received just before the retreat, I process together with what God showed Kelly and myself in Switzerland last year, with the “mouth” warning in 2019 and the wisdom verse for 2022.

I had to stop at this juncture as the rest of the team had returned from their sightseeing trip. We were going to join the local church community for their worship and thanksgiving meeting after dinner. And after that we arranged to visit the night market. I am glad that tomorrow we start our silent fast. More alone time to continue this conversation with God, which has been so hard to do for the entire year.

At the end of our retreat, the Lord instructed me to start a Lifeboat Fund for China, to provide food and necessities for a very difficult winter. The China team requested to take charge of it. But after weeks without any updates, I dived in to find out as I sensed its urgency.

I dropped everything and, together with members in Singapore and China, worked tirelessly, sleep deprived, to get if off the ground. And just in time too, for the Chinese government suddenly announced the relaxation of their covid lockdown measures.

After I wrapped that up and cautioned them that we have to prepare ahead for what is coming in 2024, with no time or energy to lose, I got back to the retreat notes and started writing. It was arduous work and I struggled to write this very post.

When I was done, V said:

V: “The outcome of the coming Mother of All War rests with the war over the mouth.”

Suggested Posts to Read With This One: