Our War Against Covid19 in Singapore 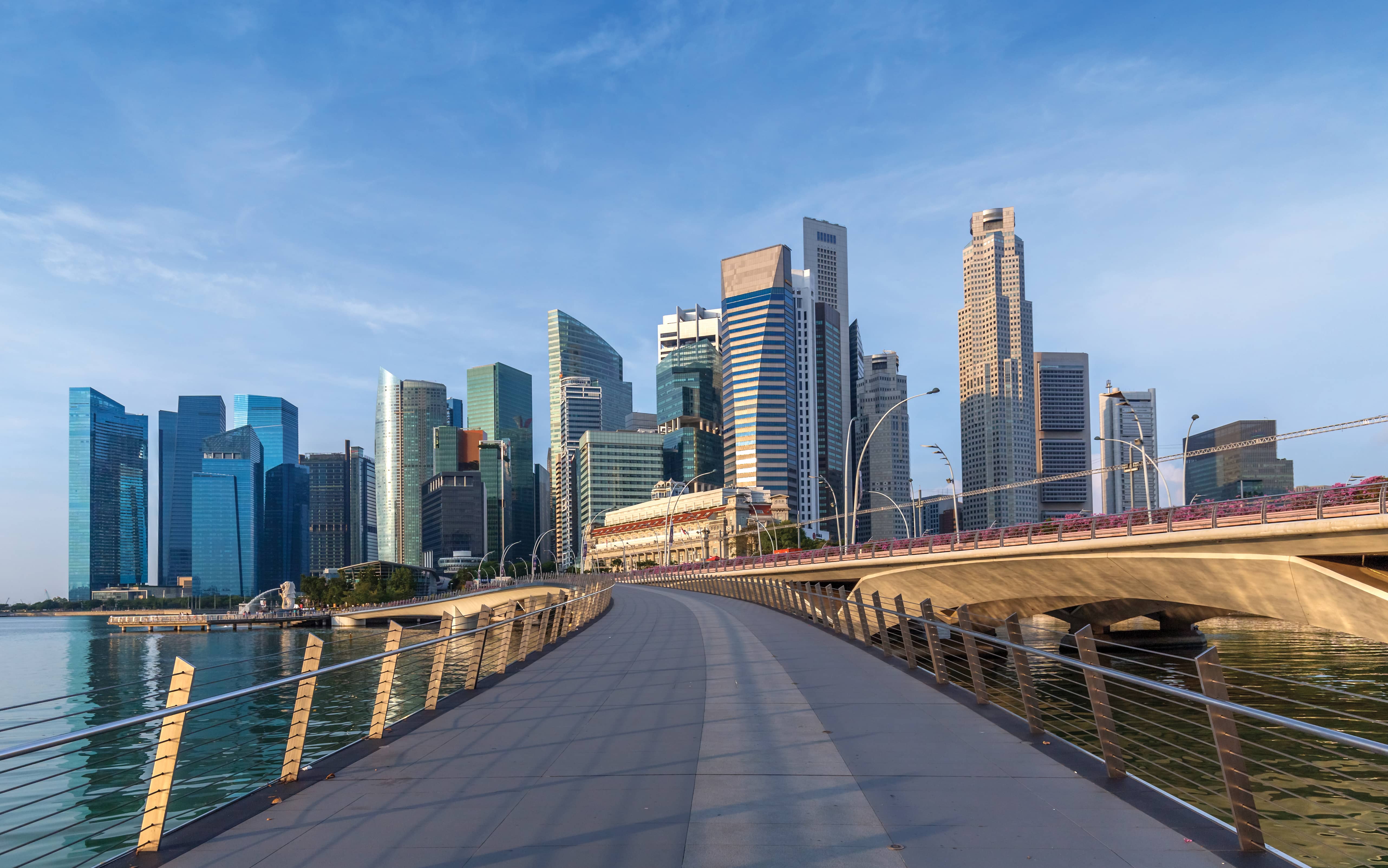 Infection numbers in Singapore suddenly rose again in March 2020, from imported cases of Singaporeans and foreigners on work passes returning from the USA, Europe and Asia as other cities go into lockdown.

More worrying, pools of untraceable clusters started to surface - the virus has spread to the general population.

On 29 Mar, there were 71 unlinked cases with no travel history and a total of 844 infected and 3 dead.

China, which saw cases down to zero in many places, also reported new imported cases from Iran and Russia.

April 2020
One Million Inflected Globally!
The world watched in horror the number of people infected with the virus crossed the 1 million mark on 2 Apr 2020, doubling in a week as the virus spread across Europe and North America and enters Africa, with 51.484 dead, according to John Hopkins University (source: cnbc.com).

On Apr 3, Singapore announced the beginning of a partial lockdown, called Circuit Breakers, of the entire country from Apr 7 to May 4, closing up retail stores, workplaces and schools as the community spread surpassed 100.

Just as we are getting the situation under control, the virus started spreading very quickly among our 300,000 migrant workers, mainly from India and Bangladesh, with those living in dormitories hardest hit.

On Apr 20, new infections, mainly from the dorms, peaked at 1,426 new cases a day, pushing the total number infected soaring past 16,000 by end of April.

"THIS PANDEMIC IS GOING TO EXPLODE IN OUR FACES!"

At the end of our bible study on 10 April, I shared with the group what the Holy Spirit showed me about the spread of the virus globally:

This pandemic is going to explode in our faces!

The Second Battle: Singapore
I was worried for my small, vulnerable country as the infection among our foreign workers is spiraling out of control.

This time, the Lord told me to let the leaders from China and Singapore take charge of the fight for Singapore and apply what they have learned in the first battle.

Chopping the Root of Our Sin: The Love of Mammon
They rose up to the challenge and started their fasting and intercession on April 20, and dealt with the root of our country’s problem, which the Lord showed me, is the love of Mammon - the lust for money and knowledge. This is a sin nature of idolatry.

"THE LOVE OF MAMMON - THE LUST FOR MONEY AND KNOWLEDGE. THIS IS A SIN NATURE OF IDOLATRY"

The teams finished their battle on Apr 24 in great triumph.

However, I struggled reading their battle reports, getting a headache each time. There was simply too much noise, a lot of strain and heaviness despite all their effort. They were trying too hard, sometimes on their own strength, doing as each saw fit. I was concerned.

I told everyone to be quiet and to worship God and wait and hear clearly, something was still amiss as the infection among our foreign workers is still very high at more than 600 a day, although local infections have come down to about 10. This battle can only be fought in the Spirit and with the Spirit of God.

May 2020
A Hidden Layer of Sin
26 May
Finally, on the morning of our Monday worship on 26 May, God revealed to me a second, and not so obvious, demonic stronghold in our country, hidden amongst the foreigners in our land, which makes up about 30% of our population of 5.7 million.

It is the sin nature of fornication, which is a tree of sin that the carnal mind covenants with the devil. To deal with the tree, we need to chop off its roots, and the root of this sin is low self-esteem, resulting in excessive boozing, gluttony and sex, just like in China.

I was led to research on tree worship in Singapore. I continue to worship God through the day and at about 5 pm, I decided to type out what I learnt and shared it with the leaders and caretakers, who also shared what they know.

The Holy Spirit also pieced together and explained what was reported earlier by the teams which I could not fathom until now - God flexing His muscle over our little country, torches sent down in different parts of our land etc. We were thrilled!

The Rod of Discipline
At around 6.30 pm, I texted the team with a word from God that He is sending His lightning rod of discipline from heaven to uproot some trees in our land. I asked everyone to be prayerful and to pray for safety of their loved ones on the roads.

"HIS LIGHTNING ROD OF DISCIPLINE FROM HEAVEN TO UPROOT SOME TREES IN OUR LAND."

Hours later, just past midnight, I heard the first sounds of thunder. I checked with the other members - it is also thundering in their homes. Shortly after, the thunderstorms arrived in full force.

At 3 am, I went to bed, to the sounds of thunder and bright lightning flashes still going on.

27 May
The next day, at 6.02 pm, my husband texted: “Did u guys hear the sound of a tree falling in the forest? Quite loud and scary but can’t see the falling tree.”

"AND THE HUGE TREE FALLS."

All of my family members replied they have and were equally startled by it, all except me, as I was huddled in my cave, trying to journal all that God has shown us!

At 9.48 pm, Asha sends me a news report in Chinese social media of the spectacular lightning display in Singapore the night before! I was bemused - can you imagine that - it being reported in China? I checked our local news media online. Indeed, it has been seen by some in Singapore too.

31 May: The Day of Pentecost
The Final Purge
On May 30, Sat night, I came down suddenly with a severe bout of diarrhea, which continued through the night till the next day; my stomach was unable to hold down any food or drink at all.

By Sunday, May 31, which was the Day of Pentecost, my body was completely weak and I could barely walk. I knew it is a battle I must fight in the Lord so I did not seek any medical attention.

The Lord told me to persevere until 6 pm and to get the teams to intercede, as my tummy rumbled to the many rumbling sounds in the sky.

He is going to purge whatever remaining evil that is in our land.

At 5.55pm, while lying on my couch, I saw a vision of an Indian or Bangladeshi worker lying on the hospital bed, and then there were two more, all going to be operated by a surgeon.

"SPIRITUAL SURGERY AND BREAKTHROUGH AT PENTECOST."

I laid my hands on my head, which was heavy and in pain. God said He will remove all unholy imaginations from the workers so that they may be free from the addiction to pornography and all sorts of sexual perversion and addictions.

I fell into a deep sleep.

I awoke about half an hour later and saw the intercessory messages from the team and know that the surgery is done and the workers are set free! Hallelujah!

At 8 pm, “The Blessing Singapore”, a montage of the blessing song sung by 177 local churches, in our 4 official languages, of all ages, was released on YouTube. 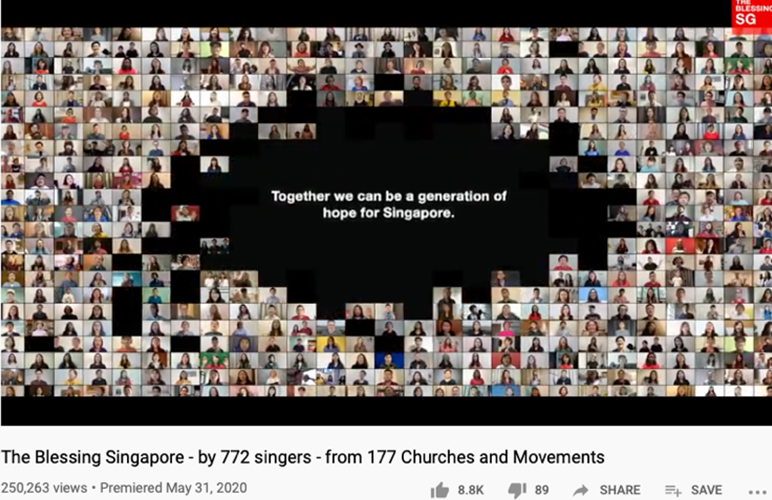 It was so moving.
I felt the Lord’s pleasure over His people in Singapore.

At that very moment, we know we have broken through as one Body, one Voice.

There is going to be peace in our land! Hallelujah! Thank God and praise His Holy Name!

My stomach recovered completely the next day and I was able to eat and I regained my strength.

Full reports of the second warfare will be published in the Library section as soon as it is ready.

Update: June 2020
Local transmissions in Singapore reduced to single digits and dorm infections drop from 516 on May 31 to 240 on June 30. 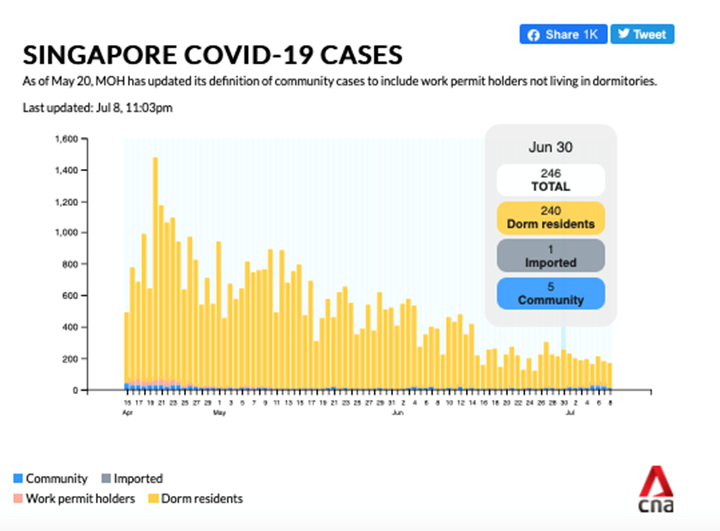 Our curve of infections is flattening! Hallelujah! The worst is over for us, at least for now!

While we are not entirely out of the woods, the circuit breaker measures in Singapore were lifted on June 2 and we carefully reopened our city in phases.

I am so thankful for the low death rate and for the diligence and sacrifice of our government and healthcare workers, besides the mercy of the Lord over our country.

As at 6 July, 06:01 GMT, the total number of cases of Covid19 pandemic worldwide stands at:

This means an increase of 11 times in infections in just 3 months worldwide!

It also means that millions have not recovered, putting an increasing strain on frontline workers and medical amenities and services.

I am filled with some dread as it means more ‘Ds”
- deaths, danger and difficult times still lie ahead for the rest of 2020…

May God help us. 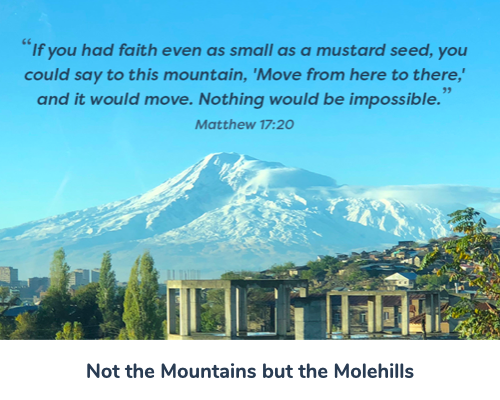 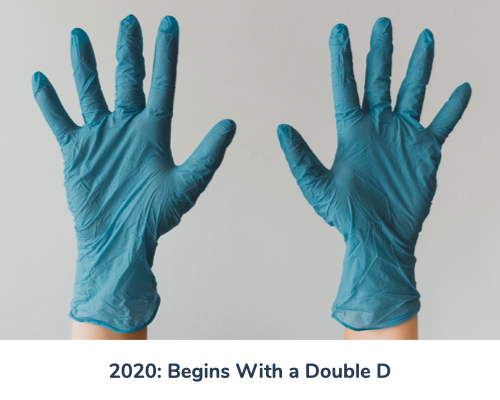